Skip to content
Inspiring others to SURVIVE and THRIVE 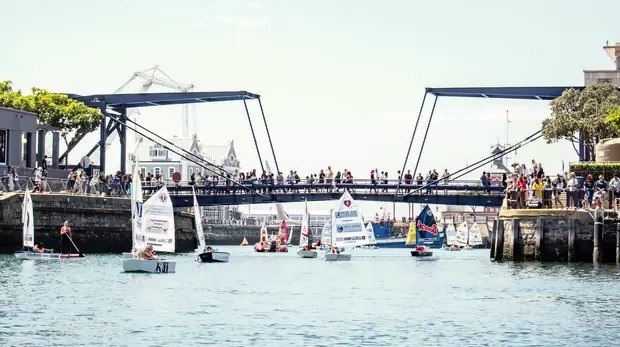 Cape Town – Shark attack survivor Caleb Swanepoel showed disability is no match for determination when he claimed the Great Optimist Race winner title for the second year in a row at the V&A Waterfront on Saturday.

The Stellenbosch University student, who has a prosthetic leg, was first over the finish line in his Two Oceans Marine boat. He was closely followed by big wave surfer Matt Bromley and double lung-transplant recipient Tanya Bothma.

“I just think it’s such a special event. As much as we’re having fun and getting in the water, there’s a bigger picture to it. It’s for an incredible cause and there are so many charities involved, so for me it’s just a privilege to be here, to learn and grow.

“It’s really special knowing that it’s for something bigger than yourself. It doesn’t matter who crosses the line first at the end of the day,” said Swanepoel.

Bothma, who is a sailing novice, took the early lead before being overtaken by Swanepoel and Bromley.

However, she claimed the fund-raising crown, collecting R40 000 that will be split between Groote Schuur’s Lung Transplant Unit and the Little Optimist Trust.

“Last year someone raced with me. This year I did it entirely on my own. There was no wind, so it was really hard. I was totally exhausted by the end of it, but I loved every minute. The highlight is being able to raise money for the Groote Schuur Lung Transplant Unit,” Bothma said.

The Great Optimist Race was a highlight of this weekend’s Cape Town International Boat Show, and involved celebrities, captains of industry and medical survivors – many of them completely new to sailing – racing to raise funds for various NGOs and charities.

The race, which is the brainchild of charity campaigner Greg Bertish, raised over R200 000 for the various charities involved.

“We’re thrilled that this year’s event was such a success. Our ultimate aim is to raise funds for charity, to give marginalised kids hope and to have some fun in the process – and we ticked all those boxes,” Bertish said.

Running to deliver the Easter Eggs!

CORONA VIRUS LOCKDOWN: All shipping suspended due to the nationwide Covid-19 lockdown. Shipping to resume when the restrictions are lifted. Contact Cara@thelittleoptimist.org if you have any questions. Dismiss